It would be nearly impossible for a clinical or financial operations team in your average emergency department (ED) to answer these questions quickly and accurately without the right data. What’s more, unless an individual has an analytical background, it would be incredibly difficult for them to know where to begin with data exploration. Yet these types of questions are critically important and relevant to understanding health disparities and ultimately, health equity.

The COVID-19 pandemic surfaced longstanding social and racial inequities, and COVID’s disproportionate impact on people from some racial and ethnic groups offered a clear example of enduring health disparities across the country. Efforts at the federal, state and local levels are well underway to begin to mitigate these disparities, including improving data transparency and improving the equity of care delivered throughout the health care continuum.

One example of such an effort is at the Department of Emergency Medicine at the University of Michigan Medical School, where Dr. Christopher Fung, MD, led the development of an EHR-derived health equity dashboard to allow for the exploration of disparities in ED care. We recently spoke with Dr. Fung about the dashboard and how improved access to data and metrics enables exploration and identification of health disparities that may need further investigation.

Answers have been edited for clarity.

Can you describe the intervention to create a dashboard on disparities in the ED?

As an analytics person, I care about collecting the right data in order to make data-informed decisions. So typically, developing a data dashboard like this is helpful for two things: process tracking and data exploration. With process tracking, we’re talking about tracking a specific process over time using a metric you know very well (i.e. the number of patients seen per hour) whereas data exploration is more about asking questions of data, usually with a hypothesis already partially formed or individual observations that you’d like to explore further. For example, you might question if there are differences in how quickly pain medications are given to patients of a different race, or differences in the time it takes to see a doctor depending on your race. Without something like a dashboard that enables you to slice and dice data, it is very hard to explore these health disparities to appropriately challenge a hypothesis. For this project in particular, we leaned more towards the data exploration side of things but the dashboard is certainly useful for process tracking too.

The advantage of working with ED data, unlike other parts of the hospital other than perhaps the operating room (OR), is that all of our metrics are common and well-validated because ultimately, EDs need to be as efficient as possible. Most EDs in the country are already meticulously tracking things like waiting room time, how long it takes for the doctor to see a patient, how long it takes to get pain medications and how many CT scans or X-rays are ordered. However, it is rare that this data is stratified by groups that have the potential to be marginalized in their care; for example, race, ethnicity, sexual orientation, gender identity, language, religion, age, and weight, among others. Additionally, it is rare that such data is accessible to those outside clinical and financial operations, such as resident physicians or other trainees.

What led you to take on this effort? What role did resident physicians play in this project and how has it been helpful for them?

Our objective with this project was to develop a data dashboard that would provide resident physicians with ready access to ED data to facilitate exploratory analysis on disparities in ED patient care as part of an existing quality improvement (QI) process. Resident physicians in EDs across the country play a critical role in patient care yet many of them have limited access to relevant data and limited opportunities to engage in eliminating health care disparities. Not only is the necessary data typically not available to residents, but it is also hard for them to understand and interact with the data to get the results they are after.

The EHR-derived health equity dashboard, which went live in September 2021, is particularly helpful for residents as they work on the QI projects they are tasked with to improve health equity issues. The dashboard provides a unique perspective enabling residents to visualize data however they want to uncover or explore disparities, begin to understand root causes, develop interventions and measure their impact.

Our initial vision was that everyone in the ED would have access to this dashboard and in particular, resident physicians could work with their mentors on QI projects. The reality is that residents are incredibly busy; many of them work 60-80 hours and while some are very research-driven and have interacted with the dashboard, the uptake has been slower than we anticipated. That said, we just rolled this out in September 2021 and new processes and workflows take time to rollout so we’ll see what the usage looks like as we go forward.

How is the dashboard being used by clinical staff?

A lot of people are using the dashboard but there are a lot of advanced views and buttons, which can be a little overwhelming. There’s a difference between something published for mass consumption, like what you might find on The New York Times’ “The Upshot” or FiveThirtyEight, where it’s more data-driven journalism with a simple visualization, than a robust data dashboard like ours. As you start adding interactivity to a dashboard, it can become more and more overwhelming with every button you can click or option you can change. So that’s a challenge for us to overcome; getting users of the dashboard to interact with it but not in a way that’s overwhelming to them or confuses the picture more.

My general sense is that people are much more willing to accept data journalism than they were just a few years ago; every media organization is doing that now. The general public is getting more comfortable with data being presented this way and the same thing is happening in health care with these sorts of dashboards and data visualizations.

What lessons have you learned since implementing? Did you discover something unexpected?

Beyond the usability challenge I described, I didn’t realize how difficult it was for leadership to get information out of the Byzantine system that is an electronic medical record. Since putting the dashboard out there, I’ve quickly realized how previously inaccessible this data was. Before I developed the dashboard, the old way to get that data was to send a bunch of emails that eventually ended up with an analyst running static reports. Now, it’s much easier to send someone a link to the dashboard and they can check for themselves.

However, it gets a little bit into the weeds when you add advanced features like comparing two groups against each other for some metric; that can become a little overwhelming to folks. So that’s sort of my ‘side job’ as a data scientist; making the dashboard more usable for people other than just myself.

My major task for this line of investigation is using data to drive some of our DEI and equity initiatives. Specifically, encouraging more use of the dashboard amongst the trainees – both resident physicians and students. They are often tasked with coming up with health care equity QI projects and there’s a wealth of data they can use to justify the project they’re doing which is important because most projects require buy-in from nursing staff, administrative staff, etc. Projects also requires money, so it’s critical to back up QI project requests with hard data. I want to make the trainees’ interactions with the dashboard – and data in general – smooth enough so that someone without an analytical background can do it. They need to be able to create the question and then go to the data for a more in-depth analysis to develop a rationale for their QI projects, or to come up with new QI projects.

In terms of future directions, pretty much every ED in the country has this type of information already; these data sets we’re using are not that uncommon. They’re all live and they’re all ready for analytics; they just need to be overlaid with some factors that might contribute to health care inequalities like age, race, gender, etc. So the longer term effort is to scale; you can scale across a larger healthcare system or even unrelated EDs because everyone has this data already; you just need the platform to put it together in a dashboard.

What other health equity work are you undertaking or planning to undertake? How can health IT fuel those efforts?

One of the things I’m interested in exploring is how the triage process biases care in the ED. Most people don’t realize how influential those notes are; they heavily influence how quickly you’re seen by a doctor. Oftentimes that piece of documentation is the only piece that’s completed in your first day at the hospital, so everyone is reading this one triage note when you are in the ED. If that note has inaccurate information or it’s biased, that affects your care. For example, if you show up at the ED in pain but you look fine, the note will reflect that and there might be an assumption that you don’t need to be seen as urgently. Right or wrong, those statements or notes are biasing and they influence more than just time; they also influence whether or not you get pain medications, get a CT scan, etc. So the language that we use in those notes is potentially biasing and that’s where I’m starting a new line of research; dissecting the language we use in triage notes and how that influences care down the road. It is likely we are biasing care across language or race even if that is not at all our intention; for example, doctors tend to describe females as “hysterical” and that has a biasing effect on what providers think of that patient, before they even go in the room and meet the patient. Another aspect is designing interventions to reduce that.

The role a dashboard could play in something like that is running an algorithm that analyzes the text of the notes based on a language disparity score, to determine whether or not that language could result in disparities in care. Something like this would be helpful to nurses, providers and others so they can better understand how the language in notes can be biasing and ultimately, draw a clearer line between language and outcomes.

What’s something that we didn’t cover about this project that we should have?

We’ve collected a lot of information and have a dashboard but something that’s not highlighted in the article is really the next step with a project like this is getting leadership buy-in. Ultimately, it’s really difficult for any project to gain momentum without leadership interest. I’m a faculty member at a large academic hospital with access to all sorts of resources and people who can help me do things; even then it is very, very challenging to turn a big ship unless the captain of the ship is bought in to where you need to go. 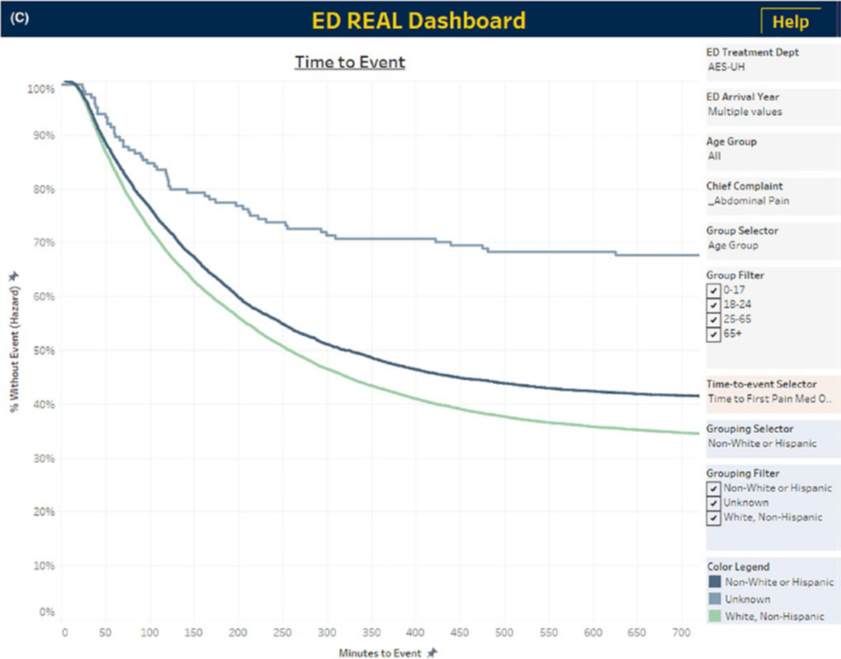 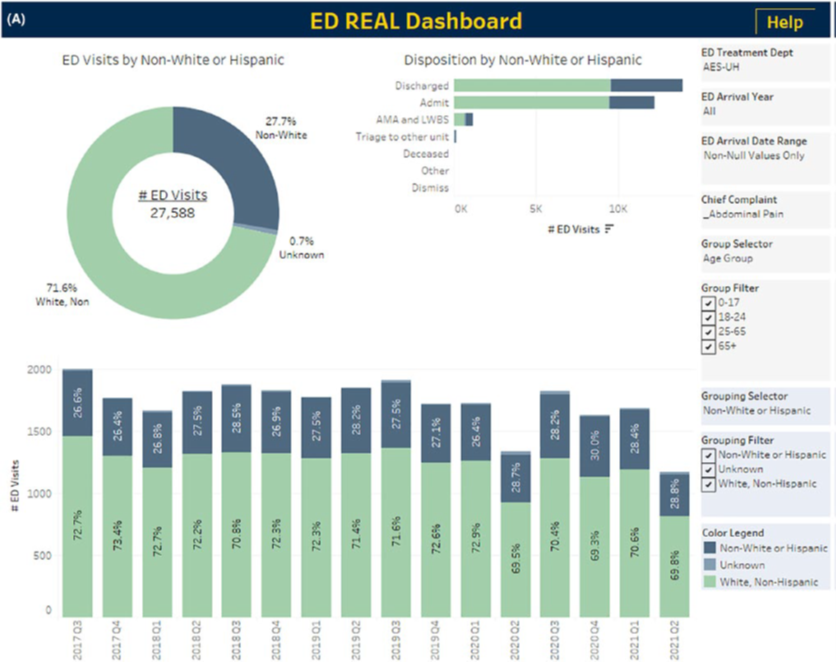 Figure A: Example exploratory analyses using the dashboard for first pain medication by race and ethnicity in patients presenting with abdominal pain. REAL, Race, Ethnicity, and Language. All panels are filtered to adult ED visits for abdominal pain and stratified by the following groups: White and non-Hispanic, non-White or Hispanic, and unknown race/ethnicity. Other selectable filters are at the right of each panel. (A) Total and quarterly distribution of ED visits by race with disposition. Counts and percentages are displayed for each of total visits, quarterly visits, and dispositions.